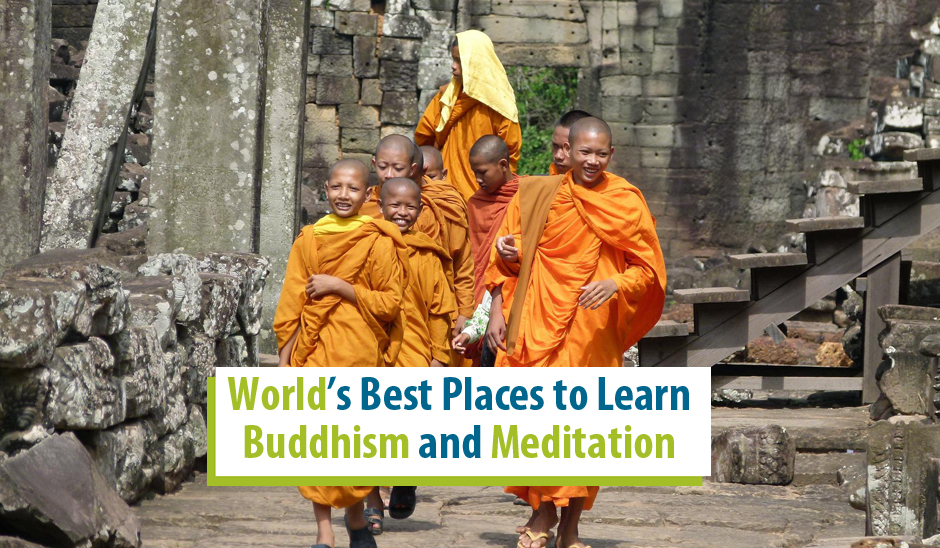 Meditation is the practice in which a person becomes more aware of their thoughts and connects with the present moment. It uses techniques such as mindfulness, focusing the mind on a particular thought, object or activity to train attention and achieve mentally clear and stable state. Meditation is practiced in numerous religious traditions.

Meditation is one of the tools that buddhism uses as a practice of mental concentration leading to the final goal of spiritual freedom, nirvana. Buddhist pursue meditation as part of the path toward liberation from defilements, clinging and craving.  Buddha himself used meditation as a means to enlightenment. For Buddhists, the realm of meditation comprises mental states such as calm, concentration and one pointedness.

Located in Western Himachal region, Dharamshala is a prominent Buddhist tour to the state. It is famous for being the home of the Dalai Lama and all the Tibetans in exile. It is a well-known center for studying Buddhism, its sutras, tantras, and major texts related to this.

The Thekchen Chöling Temple Complex in Dharamshala  is a spiritual center for Tibetan Buddhism, while the Library of Tibetan Works and Archives houses thousands of precious manuscripts.The town of Mcleodganj, Himachal Pradesh is famous for being a spiritual getaway and pilgrimage for the Buddhists. The Tushita Meditation Center in Mcleodganj where you can study and practice Buddhism from the Tibetan Mahayana tradition.

Chaiya is a small town on the Malay Peninsula, below the Kra Isthmus, on the Central Gulf Coast of Southern Thailand. It offers an interesting history, temples and handicrafts. The Suan Mokkh also known as “The Garden of Liberation'' was founded with the goal of teaching the true heart of buddhism. It has become one of the most revered Theravada Buddhist temples in Thailand.

The pagoda in Wat Phra Borommathat Chaiya is an ancient monument built with the influence of the Mahayana sect of Buddhism. It is surrounded by small pagodas in the four cardinal directions and a cloister where ancient Buddha images in different sizes are housed goes around the four sides.

The temples Wat Jong Kham and Wat Jong Klang are located next to each other on the picturesque lake in the center of Mae Hong Son, a small and charming city.They are Mae Hong Son’s most famous landmarks. The temples dating back to the early 19th century are built in Burmese style and look very different from the temples in the rest of Thailand.

The temple has a large buddha image in burmese shan style and also a wooden throne.

The Wat Jong Klang has a beautiful white and gold chedi with a large viharn (prayer hall) behind it. Inside the viharn a large number of paintings on glass can be found telling the Jataka tales, which are stories telling the previous births of the Buddha.

Lumbini is the birthplace of Lord Gautam Buddha. For pilgrims, Lumbini is one of the holiest places to visit. It is also one of the four sacred sites that Buddha reportedly advised his disciples and followers to see for themselves. There is more to lumbini than just the central temple and garden.

Lumbini  spreads out over a large area, where we can find more than 30 monasteries open to the public, meditation centers, peaceful natural areas, and landscaped parks. There are thousands of years of history to explore. You can walk in the footsteps of Buddha as you visit his childhood estate, see his mother’s city, and stand in the exact spot where he left home through a palace gate to begin his journey to enlightenment.

Kathmandu is the capital of Nepal and is also known as the city of temples. Many sites in the valley were identified with major Buddhist Caityas, such as  Swayambhu, Boudhanath and the four "Ashoka" stupas of Patan, and another two hundred stone Caityas dating from the Licchavi Period, were testified to the widespread antiquity of Caitya worship.

Kopan, a hillside Gelug monastery just north of Boudha, gives courses in Tibetan Buddhism, daily dharma talks, and retreats for practitioners in the Tibetan tradition.  Boudhanath and Swayambhunath  are popular residential centers for the Tibetan community. The pilgrims circumambulate the stupa, light butter lamps and prostates on boards laid out around the base of the stupa.

What are beliefs of Buddhism?

Buddhists believe that human life is one of suffering, and that meditation, spiritual and physical labor, and good behavior are the ways to achieve enlightenment, or nirvana.

What is meditation and how does it work?

Meditation is the practice in which a person becomes more aware of their thoughts and connects with the present moment.

It  produces a deep state of relaxation and a tranquil mind. During meditation, you focus your attention and eliminate the stream of jumbled thoughts that may be crowding your mind and causing stress.

Where should we do meditation?

Churches, temples and mosques are some of the sacred spaces that encourage observation and sharing of thoughts and feelings.  Some meditators seek out shrines because of their powerful spiritual energy. Meditation can basically be done in any environment free from external disturbances.

Are You Interested to Join our Volunteer Program?
Please click here to get the complete details on available programs, volunteerâ€™s roles and activities , accommodation, cost, visa , vaccination, airport arrival and the rest of it.
Get More Info Now »
Get More Info Now »